Early in 2020, Jeremy Harrison contacts me out of the blue on Instagram. We last saw each other in 1981, but I remembered him instantly.

At that time, 39 years ago, I was studying (briefly) at Indiana University in Bloomington in that year, a jazz major who refused to take any jazz classes. I was trying to switch to a composition major. (Long story.) Jeremy was passing through Bloomington, taking some summer art classes.

Jeremy was eating lunch in the dining hall at a table alone and I walked up with my tray and said, “You look about as out of place here as I do. Can I join you?” We immediately connected, hung out quite a bit both at IU and in Chicago when I left the school shortly thereafter. And that was about it, until… 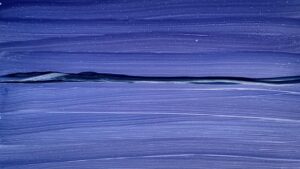 Jeremy contacts me in January 2020, telling me he listened to all of my music on Spotify, and some of my podcasts. The latter, he said, reminded him of my impromptu “lectures” in the basement of my parent’s house in 1982.

So we started exchanging regular emails, catching up on the last 38 years. In the meantime, I was checking out Jeremy’s beautiful artwork, which, with its deep and unpretentious emotional depth, immediately got under my skin.

And an idea started brewing in my head…

Still Images for Music in Motion?

On and off for years, I’ve been recording free solo piano improvisations in a format called, Piano Diaries. Occasionally I release these in collections of months or years, depending on my fecundity. Originally, I had a site dedicated to Piano Diaries, replete with images and little blog entries for each track.

All along, I imagined that it would one day be nice to have a real painter/photographer create images for the tracks. So the more I delved into his artwork, the more I realized that Jeremy might be the person for this job. I knew he was about to retire from his teaching job in Massachusetts, so I figured, what the heck, he’s bound to have some time on his hands.

Jeremy was interested but apprehensive about diving in. But we kept discussing it, and in the course of many email exchanges, he came up with the idea that instead of creating a static image for any given improvisation, he would video his realtime painting improvs to my improvs. Crazy? Yes, but through a lot of trial and error, we realized we stumbled upon something new and very interesting: painter-piano duets!

I kept sending Jeremy tracks to try out…then I realized this could work the other way: he could send me videos of his painting which I then improvised to. Through this ongoing exchange, we’ve both found what works and what doesn’t. And we’re still figuring it out.

But what’s clear to both of us is this: by mixing two art forms using this unusual method, we are having to adapt our techniques and aesthetic to work across mediums. Because this is such a new concept, I thought it would be interesting to document our process. So with each video, you’ll find our notes about what we learned, how we had to adapt, etc.

Whatever comes out of this dynamic duet, I think it’s fair to say that both Jeremy and I have been deeply affected by it. I think you will be too. Take some time to watch and listen. Something is happening here…

How Do Painter-Pianist Duets Work?

1. Peter records a piano improvisation in his studio, shares the track with…

2. Jeremy, who takes in the track, imagines what he might create with it…

3. After deciding on a medium with which to paint, Jeremy sets up his iPhone 11 to record the process… and goes. He shares the end result with …

4. Peter, who mixes everything together in Final Cut Pro.

Alternatively, Jeremy starts off with a videoed painting that Peter then improvises to.

Jeremy Harrison recently retired from teaching art at The Rivers School in Weston, Massachusetts where he was on the faculty since 1988.  His teaching included drawing, painting, printmaking, and digital photography.  He earned a BA from Kenyon College in 1982 double majoring in studio art and religion. He earned his MFA from the University of Iowa in 1985 majoring in printmaking and minoring in drawing. Inspiration for his landscape images comes from his experiences in the wildernesses of Canada, the Adirondacks, and Maine. An experienced canoeist, he helped lead a six-man, 800-mile canoe journey across the Canadian tundra to the Arctic Ocean. He continues to canoe and hike in Maine, Massachusetts, and the Adirondacks while making paintings, prints, drawings, and photographs as often as possible.

With a deep jazz-and-blues core, Peter Saltzman has produced a broad career in the music industry as composer, pianist, singer-songwriter, and author. Various ensembles have performed and recorded his work globally—the Czech National Symphony Orchestra recorded his orchestral dance suite “Walls” (1996), and the Dallas Black Dance Theatre performed “Walls” during the 1996 Atlanta Olympics. The Dallas Morning News reviewed Saltzman’s music as “powerful stuff.” His second album, Kabbalah Blues/Quantum Funk (2000), earned critical acclaim for its jazz/classical/pop fusion, hailed as “ambitious, richly layered, wonderfully accessible.” Saltzman studied jazz at Indiana University (Bloomington) and composition at Eastman School of Music. He was an adjunct professor of music at Columbia College Chicago, where he taught music technology and piano. His concert works are published by Oxford University Press; his film and television works are published by Wild Whirled Music. Saltzman’s music has been licensed for television shows, jingles, and industrials, including My Name is Earl (NBC, 2006).

Improvisations on the Ledge

Improvisations on The Ledge

In “Improvisations on the Ledge,” award-winning composer-pianist Peter Saltzman searches for universal truths by stumbling upon them—both with words and music. The basic premise is simple: he improvises on the piano, then talks about what the music tells him. Then makes music about what the talking tells him. Then…well, it goes on like this. Droll, funny, dramatic, musical, short.

How we get from a single note to a theme (motif), to a full-blown musical structure (song, free improvisation, symphony) is seemingly a mystery. And yet it’s not.

Due to a naturally occurring acoustical phenomenon known as the overtone series, one note is not actually one note—there are in fact many notes vibrating above the single note (the fundamental) we think we’re hearing exclusively.

But consciously or not, we have an innate awareness of those other notes, the overtones that ring out from the fundamental. And that awareness, at some point in human history, led us to pluck those notes out of the air, string them together into themes.

And then what did we do? We repeated those motifs, and they become something larger. First simple melodies. Then, as we repeated, we varied: shifted a pitch here, altered the rhythm there, played the motivic idea from another starting point in the scale.

In no time (though nobody knows how many centuries or millennia “no time” took to unfold) we had the beginnings of musical structure.
Music exists in time, evolves in time. As soon as you repeat something over time, and then vary it, you are effectively creating an incipient structure—whether you intend to or not.

At some point in musical history, humans began to mean it—to order notes intentionally. But that intention always leads back to one note which has within it the potential to become all notes—themes, melodies, songs, and larger structures.

You have Successfully Subscribed!